A hat trick is the achievement of a positive feat three times in a game, or another achievement based on the number three.  The term first appeared in 1858 in cricket, to describe H. H. Stephenson's taking three wickets with three consecutive deliveries. Fans held a collection for Stephenson, and presented him with a hat bought with the proceeds.  The term was used in print for the first time in 1865. Other sports also adopted the expression including hockey, football, baseball, water polo, handball, racing, and others.  Quoted from https://en.wikipedia.org/wiki/Hat-trick.

John, the disciple whom Jesus loved, had a fancy for threes as well.  John wrote three letters to churches, the gospel of John, and Revelation.  The structure of each of his three larger books appears to be outlined with an introductory thesis, each highlighting, you guessed it, three main points.  John's first letter to the church begins, "That which was from the beginning, that which we have heard, that which we have seen with our eyes, that which we saw, and our hands touched, concerning the Word of life," John 1:1 (WEB).  The body of the letter then uses the three senses of hearing, sight, and touch to organize his points.  Likewise, John's Revelation begins with Jesus introducing himself from three perspectives, "'I am the Alpha and the Omega,' says the Lord God, 'who is and who was and who is to come, the Almighty,'" Revelation 1:8 (WEB).  Jesus then tells John to write three things, "Write therefore the things which you have seen, and the things which are, and the things which will happen hereafter," Revelation 1:19 (WEB).   The body of Revelation then reveals three vantage points of time: past, present, and future (though there is much debate about the detail

Please understand that I am not suggesting that there is something magical about the number three.  There is no intrinsic power in the number three.  Numerology is the belief that numbers themselves have mystical power.  That is not what I am saying.  Instead, God the Holy Spirit is a master craftsman in everything he does, including his inspiration of Scripture.  So apparently it was his fancy to make artistic use of the threes in some of the structuring of the Bible.  Hey, so give God the hat trick!

Now, I said all that to introduce you to the most important hat trick in the gospel of John.  There are three verses placed at the beginning, middle, and end of the book, each highlighting the same wonderful message.  In fact there is a strong correlation between these three verses and the introductory thesis found in John 1:1.  Way cool!  So, yes, the Bible is more than an encyclopedia of verses, but in fact a composition with introduction, body, and conclusion.  This is very useful to help us identify the main points of John's gospel.

Let's consider the verses in reverse order.  The third verse is John 20:31 (WEB).

but these are written,
that you may believe that Jesus is the Christ, the Son of God,
and that believing you may have life in his name.

This verse is the checkered flag for John's hat trick through the life of Christ.  At the end of Chapter 20 John's slams home his main point for the entire gospel.  The gospel of John falls into the literary category of historic biography and specifically a persuasive call to action.  John 20:31 is our call to action.  Read the simple verse again and there is the greatest invitation in the entire world that we have ever or will ever receive.  John's gospel tells the story of the most amazing man ever... the God-man!  Will we trust him and have life in his name?  That is our call to action.

Yet consider that the simple word life is free from adjectives to emphasize that we are invited to whole life, all of life, the best of life, the essence of life, to life itself!  John began his gospel in John 1:4 saying that "in Him was life" and concludes with the invitation to receive life.  Life is translated from the Greek ζωή transliterated as zōḗ and it simply means life.  So we see that John's gospel conclusion is anything but a fire insurance policy to protect our own interests, to protect our own skin, or even to merely escape Hell.  Instead John's call to action is an invitation to let go of self-protection, let go of self-interest, let go of small things, and instead through Christ to begin the essence of life itself, to truly live in the only way that is possible, to live the life that God our creator designed for us, to live in the love of our redeemer, Jesus Christ.

As we consider John's hat trick of verses, traditional ideas about salvation will be radically challenged.  Jesus' invitation to life is so much more than the simple Western Evangelical gospel recipe of 'trust Jesus, go to Heaven.'  In fact such a watered-down gospel totally misses the true gospel and is no gospel at all!  Why settle for a mere fire insurance policy that at best only offers a false sense of security, when Jesus invites us to a totally transformed life and relationship with the creator of the universe.  Jesus is offering ALL of life to those who are ALL in.  Are you ALL in to Jesus?

The thief only comes to steal, kill, and destroy.
I came that they may have life, and may have it abundantly.

Everyone understands that this verse is speaking about the abundant life of a restored relationship with God himself, our Father in Heaven.  The word abundantly is translated from the Greek ερισσός with the root περί which is transliterated as perissós.  This word means beyond, superabundant in quantity or superior in quality,  excessive, preeminent, exceeding abundantly above, more abundantly, advantage, exceedingly, very highly, beyond measure, more, even superfluous.  Superfluous?  Yes!  Unnecessarily extravagant!  Jesus came to give us life pouring over the brim.  Oh yeah!  I'll take a flood of that!

The point is that this is the life that Christ calls us to live now, right now, this moment and every moment.  He wants us to know and have confidence that we are entirely and unconditionally loved by God so much that even our trials on earth are abundantly blessed with his awesome purpose.  Jesus came that you and I "may have life, and may have it super-abundantly, exceedingly, highly, beyond measure."  Again Jesus and his messenger John are not peddling tickets to Heaven or get-out-of-Hell cards!  Western, capitalistic, and fearful thinking are naturally wired to 'close' the sale and settle the 'deal' so that we put our minds at rest and get back to our lives.  Why would we ever reduce the gospel to the likeness of an eternal time-share vacation purchase?  Instead, Jesus wants to give us life that we do not even have without him, life rooted in a loving relationship with God himself.

And now the first verse of John's hat trick... the most abused, the most mistreated, the most misunderstood verse in the history of Christianity.... yes our very own John 3:16 (WEB).

For God so loved the world, that he gave his one and only Son,
that whoever believes in him should not perish,
but have eternal (aionian) life.

This is John's hat trick opener.  However, contrary to Western Evangelical thinking this verse is terribly translated and instead makes the SAME point as the previous two verses above.  Fire insurance salesman have twisted this verse into a cheap recipe to escape Hell.  However, instead this verse stands as the grandest invitation to mankind.  Just as with the other two hot shots, the first hot shot screams into the net to tell us that God loves us, gave the life of his own Son for us, and through trusting him our life will not be wasted, but instead be made whole, a life completely restored to God's awesome purposes.

'Wait!', you may say.  'The verse says ETERNAL life', you may point out.  Please listen to me and consider carefully.  God is raising up a small army of Davids to take on the Goliath of Western Evangelical tradition to right a great wrong and set the record straight.  And I have joined David's army.  The word translated as eternal is the Greek αἰώνιος transliterated as aiṓnios, or commonly aionian.  This Greek word means from start to finish, pertaining to the age, lifetime, entirety, and complete.  You may ask, 'Are you saying the most well known Bible verse in the entire world is mistranslated?'  Yes... I am. The absolute quickest explanation is that the Greek word aionian is the adjective of the noun aion.  Aion is the Greek word for age, the ancestor of our English word eon.  The connection between aion and eon should be easily seen, just as the connection between aionian and eonian.  The Greeks used the word aionian to describe anything that filled the boundaries of its existence.  Simple chronological, endless, or infinite time was never in view, but instead entirety and completeness. So God is not peddling tickets to eternal life for those seeking to protect their own skin.  Instead he is giving super extravagant abundant wholly restored life to those longing for a relationship with their creator God, Jesus Christ.  Read Dr. Keizer and Ramelli and Konstan for proofs.  Begin with an abstract of Dr. Keizer's conclusions.

Furthermore, context is always the king of meaning.  In the case of John's hat trick the meaning is even more clear when we consider the context of John's entire book, the introduction in John 1:1, and the main point of all three verses in their context.  All three verses progress toward the same point!  John 3:16 teaches us that God gave us his own Son so that through trusting him our lives would not perish and be wasted, but instead be restored, made whole and complete.  That is the beginning.  Second we see in John 10:10 that Satan came to steal and destroy, but Jesus came that we might have life and have life super-abundantly.  That is continuing.  And thirdly, we see in John 20:31 that Jesus is the Christ, God himself, and that through faith in him we can live the very essence of life!  That is the grand conclusion.

Friend, trade in your cheap fire insurance policy and instead know God as he is, your loving Heavenly Father and through faith in Jesus, God the son, and begin to truly live!

P.S. 'What about salvation from eternal Hell?' you ask.  Friend, you are still missing the point.  When your eyes are on the clock on the wall your unbelief is revealed.  Sit down, get your eyes on Jesus, trust him, and enjoy fellowship with the man at the head of the table!  Our Heavenly Father's loving eyes are on you and every one of his people.  Not one will be lost.  Truly?  Truly!  Not one will be lost.  Everyone destined for glory will be there without question!  Jesus even promised, proved, and prophesied the defeat and emptying of Hades itself!  His grace will save even the wicked unbelieving elect at the last day just as he prophesied!  There is no escape from the love of Jesus Christ.

That is the awesome news!  Praise God! 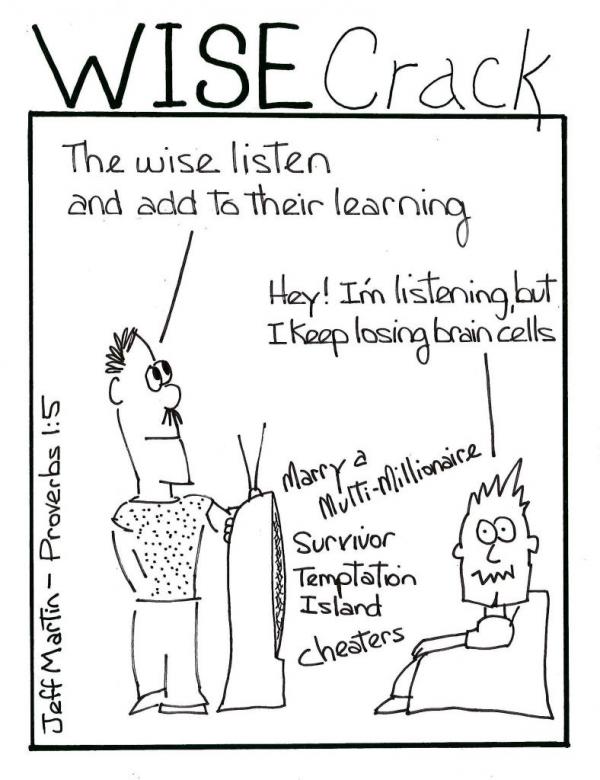 Optimistic Study Guide
Proverbs 25:21
Jonah 3
Rescued by the Eternal Life Guard!
Matthew 6:13, Lead us not into temptation
Isaiah 26:17-19, You Cannot Tell It, But,,,
The Bill of No Rights
END_OF_DOCUMENT_TOKEN_TO_BE_REPLACED