Objectors to my hopeful conclusions about salvation have asked me to review other books in order to win me back to traditional theology, that is that few humans are saved while most are eternally damned.  I have taken up the challenge and have posted various Book Reviews on my website.  I thought it was a fair suggestion to allow myself to be influenced by Christians of different conviction.  However, I thought it would also be fair to review books by those also holding to the salvation of all mankind in order to compare our reasons.  Perhaps error in their reason would win me back to tradition, or truth in their reason would confirm my conclusions.

I have found that there is quite a range of thought even among those confident in the final salvation of all mankind.  In fact, sadly, the divisions between them in faith and fellowship might even be deeper than between those of traditional Christianity.  Yet, most have observed, as I, that "aion" is at times wrongly translated "eternal" in the English New Testament.  Some are silent about the salvation of fallen angels, while others have concluded that even Satan will be saved, to which I am not yet persuaded.  Most have respected and protected inspiration and strove for reasonable interpretation of the given Word, but some have even violated the Holy Spirit suggesting that difficult verses are better explained as human error.  Many have even further differences of various natures, no doubt influenced by the traditions and experience from which they came.

I wanted to give my review of Robinson special attention because his book includes a concept that could wrongly be considered the same as one of my own conclusions.  I have said that integral to the gospel are Special Strategies to reach the heart of the unbelieving as mentioned in my articles, Flying Impossible and Proverbs 26:4-5.  Robinson has similarly said that the gospel includes the mythological reality of eternal damnation for the unbeliever.  Though I have significant points of comparison with Robinson, I want NO part of his assertion that the Holy Scripture contains mythological reality.  Instead, the only myths that have ever existed are the myths in the mind of unbelieving man.  For further explanation read my brief review of Robinson's work following. 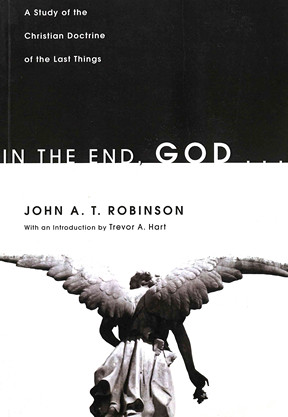 John Robinson wrote In the End, GOD, A Study of the Christian Doctrine of Last Things.  Robinson offends epistemology and inspiration so gravely with the invention of eschatological myth that many will throw the book away after Chapter 5, if they get that far.  I nearly did myself!  Yet he makes key points in later chapters: The Resurrection of the Body, The End of the Lord, and All in All.  He is accused of arrogance by Trevor Hart for asserting that God must save all mankind because of Christ.  On that point I join Robinson!  Yet Robinson missed the aionian nature of Hades and instead violates inspiration to explain Scripture.  Thomas Torrance also condemns Robinson for saying the gospel includes the mythological reality of eternal damnation for the unbeliever.  Yet Torrance is self-condemned saying the mystery of sin requires the damnation of unbelievers even though their sins are atoned!

Robinson's book is terribly difficult to read as well as the essays in response by Trevor Hart and Thomas Torrance.  I confess that I only understood 50% of any of it, at best.  So I will keep my review to the main points in simple outline form.  If I have misunderstood Robinson, Hart, or Torrance, please contact me and I will correct this article immediately.  Yet as much as I understand Robinson, his theology can be outlined in the proverbial Good, Bad, and Ugly.

My clarification of the good news to mankind is instead, believe!  Your sins are forgiven!  Meet me in Heaven!  Do you deny that Christ is your Savior?  Why?  He IS your Savior!  Be thankful that Christ has paid for your sin because the destiny of all those not saved by Christ is the eternal Lake of Fire.  Why anger the Lord and hear him say, "You are not my sheep?"  Yet you must be warned that even if you give your life to religion, destroy your life with sin, and suffer an age in Hades resisting grace until the very threshold of damnation, even so, NOT YOU OR EVEN ONE of those for whom Christ died will ever enter the Lake of Fire which is "prepared for... the Devil and his angels."  Why wait?  Why destroy your life with sin?  Testify that Christ is your Savior!  Be transformed by the Holy Spirit!  However, IF Christ is not your Savior and the Savior of all mankind as you say, then nothing can save you from eternal damnation.

Robinson's gallant effort illustrates the true plight of sinful man.  We are in utterly desperate straits: you, me, and Robinson.  Apart from grace we are dead with eyes sealed shut to the truth of God's unconditional love.  However, when our eyes are opened to even a ray of the shining light of truth we cling to it with all the muscle and tenacity of a desperate mountain climber.  Even if we hang by a two finger hold at the last precipice of Mount Everest, we cannot let go of the truth we have seen.  We are sinners in desperate need of forgiveness, and in Christ there is forgiveness for sinners!  Our hands and feet may not find stable ground to answer all the questions we might have.  (Not because stable ground does not exist, but thorns, thistles, and Satan's schemes obstruct the way.)  So we hang on to what we know with hands and feet struggling.  Such is a good description of Robinson... and perhaps even ourselves.  Were we to see my mountain climber metaphor enacted on film, we would be clutching the edge of seats and the man with the two finger hold would be praised in the end!  For the Lord himself will lift us to final safety, the dark glass will be removed, we will see him face to face in glory, and he himself will praise our faith in spite of our failings.

Though I feel Robinson has erred greatly, I find great kinship with his assertion that the work of God in Christ must bear the fruit of the salvation of all mankind.  Though Robinson is accused of arrogance for this assertion, he is woefully misunderstood by his wicked unbelieving critics.  For his assertion that God must save mankind is rooted in the fact that God himself determined to do it and has already accomplished the absolution of all our sin at the cross of Christ.  Since God himself has already paid for the sins of all mankind, then who remains to condemn?  Friends, no one.  No one.  On this key point Robinson clings to the very heart of Christian salvation and hope.

If we acknowledge Robinson's grave errors and commend his tenacity for God's unconditional love, we will see that the greater arrogance is not Robinson's, but in fact Hart, Torrence, the Calvinist, the Arminian, and the religious.  They claim that their sins are forgiven, with at best hypocritical doubt or likely condemnation for the remainder of humanity.   What is the basis for their faith?  It is not founded on the bedrock of Christ!  If the grace of Christ for ALL mankind is not the hope of these arrogant, then it can only be a human condition that they themselves have supplied.  That is the arrogance of the religious.  Take care!  Arrogant rejection of grace of this kind is just the sin for which the fires of Hades burn.